The 1875 Atlas for the county does not show the location of an earlier Waters school and no deed has been located. Thus, the exact date of origin of this school district cannot be confirmed. However, the Lawrence County News on July 21, 1938, reported that the board members of Waters school had perhaps the oldest record book still in use in the county at that time.  It dated back to the years of the Civil War and showed carefully made records of board meetings and of the teachers employed.

Joseph Fritchie taught at Waters school in the 1880’s.  Family history reports that he married the prettiest girl in his 8th grade class.  Her name was Lydia Ellen Boots, and she was 17 and he was 37.   Their marriage produced eight children.

The first mention of the school that could be found in local newspapers was a notice in the Birds Review on Friday, March 25,1887, that entertainment would be held at the Waters schoolhouse.  The teacher was Terry Smith during the 1889-1890 school year.

1968 Reunion of Classmates
Six of the living female classmates of Waters Schools 1890 held a reunion in October 1968. The seventh classmate Mattie Mendenhall Henry was unable to be present.  Seated from left to right: Anna Allison Clements, Daisy Fritchie Mullins, Hattie Fritchie Wagonseller, and Rena Steffey Allison.  Standing: Grace Lindsay and Victoria Crowe. Also present (top photo) was Lillie Lindsay Gerhart (89) who was not a member of the class, but attended the school at the same time the others were younger pupils 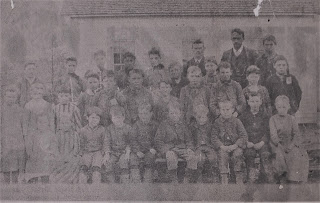 Truman Ford taught the fall/winter term in 1903-04, while Lyman Emmons was hired as the teacher for the next year. The Lawrence County News reported on November 30, 1905, that a pie supper was held successfully at the school.  The proceeds amounted to $23.42 that was used to purchase books for a library. The cake for the best-looking girl brought $10.30. Dora Steffey received the cake. The pie for the ugliest boy was awarded to Lloyd Emmons, with John Brashear a close second.
The record for 1907-08 shows that Lora Seitzinger was originally hired as the teacher but resigned December 25. The teacher for the rest of that year as well as the following two years is unknown. For the 1910-11 term the Board hired Mrs. Blanche Smith, which was unusual for the time because married women were not generally hired. The Lawrenceville Republican reported that a box supper was to be held at Waters school on November 4, 1910, for the benefit of the school. The previous year the twenty-five dollar proceeds received from another box supper were used to enlarge the library.
Ralph Zehner was hired for the 1911-12 six-month school term by School Directors J. M. Pinkstaff, B. A. Montgomery, and W. P. Montgomery to teach thirteen students at Waters for $47.50 monthly. R. R. Kimmell, the County Superintendent of Schools, reported that the grounds were in very poor condition. There were eight small trees, no water, and the outhouses were in poor condition. The fuel house was good, but the school house needed paint and was in poor repair.  The stove was bare; there was no ventilation; the walls needed papering.  Seats were improperly placed, and were old and not of the right sizes.  There was a good bookcase, containing 104 well-selected volumes, window shades, some good pictures, a globe, a dictionary, but no maps.  The very poor condition of the building and furniture made a new building the only practicable solution for the problem according to Kimmell.   He felt that owing to the small enrollment, the question of abandoning the school and annexing the district to adjoining districts should be considered. Something had to be done because those few pupils needed just as many conveniences and just as good an opportunity as a large number of students.
The following year with Directors, Fred Conrad, J. M. Pinkstaff, and M. A. Montgomery, things had certainly changed. The school building had gone from one of the poorest in the county to one of the best. The house was first moved, turned halfway around and a solid foundation put under it.  A new porch was built in front, a belfry with a bell was constructed, and new siding and roof were added.   Inside, a new flue was built in the front end of the building and a Waterman-Waterbury room furnace installed. A new floor was laid, woodwork repaired and painted, walls papered, and new single seats purchased.  There was a good teacher’s desk with chair and a sanitary water container.
Kimmell reported that the things done in this district in a single year could be done in thirty other districts which were better able financially to do them than this district was.  Considering the size of the district and the assessed valuation, this record for improvements had not been equaled by any other district.  An argument often advanced by directors against making improvements or for hiring a cheap teacher, according to Kimmel, was that the enrollment was so small it did not pay.  The patrons of Waters school evidently believed that their children were just as good as any other children anywhere even if there were not quite so many of them, and they were entitled to every opportunity to get what the school should give them. Hanford Tiffany, who had been a student at Charleston, Illinois, was hired to teach sixteen pupils for $45.00 monthly that year. Leland Crow taught the 1916-17 term for $60 monthly.
to be continued tomorrow
Posted by Donna Burton at 4:30 PM