Some news in the County during the late1840s:

Frederick Hawkins filed notice against his wife Phebe Hawkins for a divorce to be decided at the September term of the circuit court 1847. (They were married in 1845 in Coshocton County Ohio according to family sources.)

From the editor: The reason why the Banner did not make its appearance last week was in consequence of our being out of paper.  We had sent to Cincinnati for a supply, but unfortunately it didn’t arrive in time.  We will further state that our readers may know that we made some exertion to prevent a failure that we went to Mount Carmel, Vincennes, and to Princeton to borrow paper, but could not get any for either love nor money.

James Thompson, executor for estate of Samuel Lemons (death prior to July 27, 1849). The will named his wife Jane, his son Samuel, and his daughter Nancy Ellen as beneficiaries. (Lawrence County Courthouse Records).

Editors: J. F. Buntin and Richard Beck   The cost of a subscription for 52 weeks was $1 if paid in advance. $3.00 if it took 12 months to pay for the year. Subscribers would be charged one dollar to announce their names as candidates and $2 would be charged to any person who was not a subscriber; this was payable in advance.  The Banner was Whig in politics but stated that they would “never forget to be courteous, and never be guilty of distorting the history of the country to subserve party purposes.”

James M. McLean, Esq of this county, has been appointed Register of the Land Office at Palestine in the place of H. Alexander, Esq.

“The partnership of the practice of law between J. G. Bowman and Wm. Harrow has been dissolved as of June 24, 1848.” The 1850 census listed five lawyers: Matthew McFetridge, Wm. Mills, Joseph Bowman, Wm. Harrod, and Aaron Shaw.

Wm. Baldwin, H. H. Shepherd, S. H. Clubb, and Geo. Buchanan, all were agents for Poole and Brother merchants in New Orleans in selling western produce. If local farmers wanted to ship their produce down south, they would enlist the help of these gentlemen.

H. Badillot asked that everyone who promised funds to purchase instruments for the Lawrenceville band please pay now.  Wait. . .We had a band? 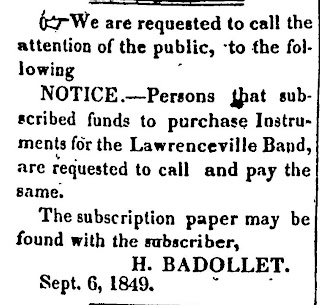