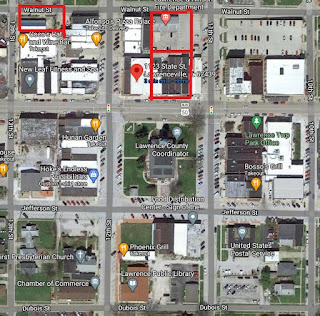 January 18, 1823 Samuel Harris purchased two lots $120, Lot 4 and Lot 15, which provided him with access on Sugar/State Street directly north of the courthouse, and on Walnut street where the Lawrence and Allison Fire Dept. building is now located. December 9, 1829, he also purchased Lot 7, on which is located now Coco’s Catering Barn.

Harris began purchasing real estate from the government in the northern part of Russell Township close to the river on December 28, 1815, as well as in other areas of the county.   (Government Land Records)

In 1819, Harris was a subscriber to first recorded school in what would later become Centerville, in  Lawrence County. The school directors believed a new school building would cost $400 and they proposed to sell 50 shares at $8.00 a share.  Each shareholder would purchase as many shares as his family required for each of his children to attend school. As children graduated and a particular family no longer needed their shares, these shares could be resold to some other family who had school- age children. Free blacks were included as shareholders.  Harris purchased 6 shares for $48. (Deed Records)

Harris was the foreman of first grand jury held in Lawrence County on June, 1821.  He later became a county commissioner in 1827, when bids were accepted for repairs to the state road from Lawrenceville to Vincennes, as well as being appointed county treasurer by the county commissioners in 1830-1831. (County Records)

While slavery did not exist in Lawrence County, contracted servitude for a lengthy period of time did. The following ad placed in the Vincennes seems to question the “free” status of the African Americans living at Samuel’s house. 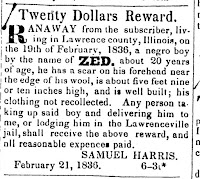 "Ranaway from the subscriber living in Lawrence county Illinois, on the 19th February 1836, a negro boy by the name of ZED about 20 years of age, he has a scar on his forehead near the edge of his wool, is about five feet nine or ten inches high, and is well built; his clothing not recollected. Any person taking up said boy and delivering him to me, or lodging him in the Lawrenceville jail, shall receive the above reward, and all reasonable expenses paid.  Samuel Harris February 21, 1836"