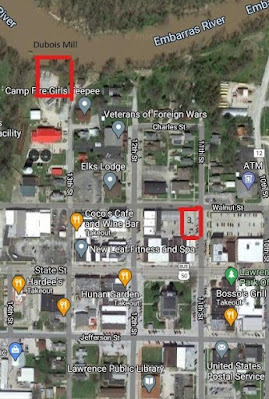 The red square in the top left shows the location of the Dubois Mills in the early 1800s.  The smaller red square is Lot 3 in the original plat of Lawrenceville and was purchased by Henry Dubois in 1824.

Honore (Henry or Henri) Dubois was baptized December 4, 1792 according to the St. Francis Zavier Parish Records, the son of Toussaint and Jeanne Bonneau Dubois and half- brother to Jesse Kilgore Dubois who served in the general assembly with Lincoln.

Henry, along with his brother Toussaint Jr., fought in the Battle of Tippecanoe as privates in Capt. Benjamin’s Parke’s Light Dragoons.

Researchers believe that Henry married Ophelia Clark, the beautiful stepdaughter of Mr. Beckes who fought a duel across the river from Vincennes in the woods of Lawrence County to defend her honor from comments made by Dr. Scull, a suitor, in July, 1813.  Henry’s marriage to Ophelia took place about a year after this incident, August 27, 1814.

Henry lived at Dubois Mills on the Embarras (present site of Camp Fire Girls cabin on 13th street) with his family on May 9, 1820, even though at that time, this area was considered a part of Edwards County.  As shown in the 1820 census for that county, there were 2 males under 10, 2 males 26-44, and 1 female 16-35. Henry Dubois also had one female slave under the age of 14 living with the family at that time.

Henry became the first sheriff in Lawrence County, June 4, 1821, and served until 1825. He built the first pen for stray animals as ordered by the County Commissioners and charged the county $7.75.  The first county jail was ordered on September 4, 1821, to be built by Cornelius Taylor for $675 for Henry’s use.   Later, Henry executed judgments on Cornelius Taylor’s property (see blog for entry about Cornelius Taylor).

Henry’s father’s estate took a long time to settle because of numerous lawsuits between the heirs.  The site for the mill, where he and his family had been living, was sold on January 28, 1824, and included a frame and log dwelling house, stable and other out-buildings. This may be why on June 7, 1824, Henry purchased Lot 3 in the newly platted town of Lawrenceville.

However, in 1825, Henry transferred his share of his deceased father’s real estate in trust to James McLean and Gabriel Cauthorn to pay off his debts. The Lawrenceville Cemetery would later be built on part of this land.

An abstract of Lot 3 is unavailable at this time to determine the date Henry sold this property.  Ophelia died in 1826, in Knox County, Indiana,  so it may be that after Henry’s term of sheriff was complete, the family moved back to Vincennes.  No other information about Henry as been located.