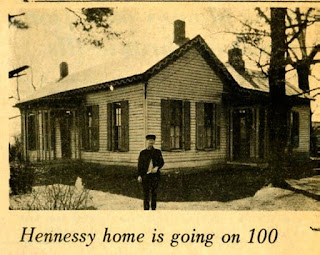 This photograph was found In the Daily Record on February 10, 1971.  William S. Hennessy built this home in the late 1870s at 1802 Porter Avenue.  Pictured is his son, Thomas R. Hennessy.

Ernest Helm and Sam E. Jones compiled an informal list for what they called the Sesqui- Corner published in the newspaper in 1971.  No doubt there were other homes from the nineteenth century and asked readers to notify them of others. It would be interesting now to see how many houses remain.

According to Helm and Jones, other homes built before 1900 include the Watts house on Lexington at 13th where Miss Mildred Watts and Mrs. A. H. Worner were born. The Gilbert home on 9th north of State behind the Marathon Station, several homes on Jefferson between 13th and 15th; the Bunyan home at State and 7th built in 1895, the Cunningham home behind the hospital, and the two houses on the south side of State between 7th and 8th built by the Lackey and Purdy families.

Byrd Bridgett’s (1971) home formerly stood where the post office parking lot is. It was owned by George Nunn and was later moved to its location on Jefferson street. The big house trimmed in red on Lexington, one house from the Porter avenue corner dates from this period.  The long windows give a clue to its age, according to Jones.

Other houses of the last century are at 1416 Tenth, at the foot of the State Street hill on the north side at about 5th street, and the building on Jefferson where Dr. Charles Stoll has his office (1971).

If you live in one of these homes, or know of others, please contact us lawrencelore@gmail.com.