" The un- organized Lawrenceville checker club contained the following members:  J. H. Roberts, Dr. Z. D. French, Captain Utter, Harrison Hardacre, J. B. Robinson, P. J. Carr and G. P. Gordon, perhaps the last two named should not be included in the club although they were frequent players. Mr. Gordon was traveling in those days and his attendance at the club was during his weekend visits home.  P. J. Carr was an excellent checker player but his playing was only at such times as his work did not call him.  The meetings were held in the Roberts store and the Stoltz drug store.  The Stoltz drug store was where L. L. Bussee is now located and was conducted by S. O. Stoltz.  Those were important, long drawn- out games with which nothing was allowed to interfere-- meals, business or sickness.  The J. H. Robert’s Hardware store was located where the Lewis Drug Store has been for some time.  Mr. Roberts sold his store in the next few years, closing a forty- year term as a Lawrenceville business man."

Ed Note. The stores mentioned were located on the north east corner of the square in Lawrenceville, where the Credit Union and Rachel Michele's hair Salon is now. (Many of you will remember that was the Studley Drug Store corner.) S. O. Stolz was located in what is now the credit union building and J. H. Robert's hardware store was located in what would later become the drug store building. 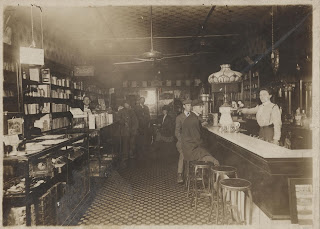 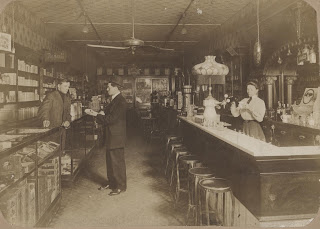 These photos were taken in 1911 after Paul Lewis had started Lewis Rexall where the hardware store had been located.  Mary Westall is at the soda counter with Paul on the left side talking to an unknown drug salesman from Evansville in the bottom photo.  The top photo shows Ed Potts, Dr. and Mrs. H. V. Lewis, (Paul's parents)  Chester Dittman, Pat Conover and Mary Westall, again  behind the counter. The seventh person was not identified on the back of the photo. If you look closely you can see both a Rexall and a Coca-Cola sign.