Fundraiser:  The Historical Society will once again be offering fresh evergreen swags for home decorating needs for the holidays. Made locally by Society members, these fresh boughs of local pine and cedar are accented with bunches of fresh holly berries.  A large all-weather red velvet bow adds the finishing touch. The cost is $15.00 each. Please call Donna 908-208-2372 of Nancy  618-240-2021 and place your order. WE also have grave blankets for sale as well.  See previous blog for pictures.

In the Pink Letters book, a Lawrence County Historical Society publication of letters written by Lawrence County natives who subscribed to the Sumner Press in the 1920s, Mrs. Kate Greer Keplinger told how her father Richard Greer, her uncle William Nunns and another uncle, W. H. Brown laid out the town of Chauncey in 1858.  A new frame school house was built there at that time, The M. E church soon followed by M. P Luther Watts’ first store.  In the 1860s, Chauncey got its first post office. Prior to that letters for that area were addressed to the Petty Post office about five miles away.

Mrs. Amy Weaver Richey (born 1875) responded with another letter March 23, 1916, who described Chauncey during her childhood.  “Chauncey was quite metropolitan by comparison when I arrived at school age, for in addition to a dozen or so houses, two churches, Rush Newman’s store and the store and post office kept by “Grandpa” Berkshire as he was known to everyone, the brick schoolhouse had been recently built. 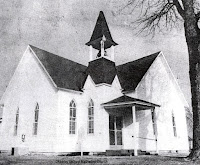 "Although I attended both churches rather impartially, when old enough, it is the  M.E.  or “East” church as it was usually termed that holds for me the most tender associations, for my first attendance at the original building was on that saddest of occasions, when father lifted me, a tiny girl, to see mother’s face, for the last time as she lay in her coffin. When I passed through the doors of the present edifice, twenty-five years later, it was to follow father to his final resting place by her side in the old Wagner Cemetery." 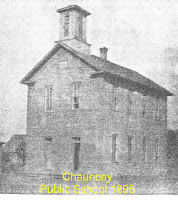 "Chauncey is a village of 85 inhabitants situated on a beautiful strip of Prairie, 8 miles almost due north of Sumner. It contains three good country stores, one drug store, one shoe shop, two blacksmith shops, a two-story brick school house and two churches. It has within its limits two organizations, one F. M. B. A.  lodge, a brass band and four professional men, a doctor, a preacher and two school teachers. The village is surrounded by some of the most beautiful country, and a great variety of soil."
Posted by Donna Burton at 4:30 PM