Still sits the school house by the road,  A ragged beggar sunning,

Around it still the sumacs grow    And blackberry vines are running.

This little verse probably describes the first school house in what was then Washington school district. The school house was located just east of Shiloh Church, and its shabby appearance, the material from which it was made, and the small trees that grew up around it gave it the name “Old Hickory.”

“Old Hickory” was indeed a typical school house of the early days, and was erected perhaps as early as 1830. It was built of hickory logs and was about 30 feet in length and 20 feet wide, having three small windows on each side. One small door in the south end admitted the pupils into the building. The entire equipment consisted of log benches upon which the pupils set from early in the morning till late in the evening.

Reading, writing, arithmetic, and spelling with a little grammar and geography for the older students were the only subjects studied during the whole term. In the evening, the teacher would collect the pupils’ books and store them away in the loft where they remained till time for use the following day. The school was generally crowded, frequently the enrollment would exceed 80 pupils in one winter.

About the year 1854, it was decided that “Old Hickory” was too small to accommodate the children of the community, so another building was constructed on the south side of the road just opposite the old building. This building was built for both church and school purposes and consequently was much larger than the first building. The new building soon became the social center of the entire community. Spelling schools, singing schools, agriculture exhibits, writing schools, Good Templer Lodges and revival meetings were all held in the building.  O.V. Smith, Mr. McKalpan, and William Hyet were probably the only teachers that ever taught in this building.

In 1862, a frame building was erected by James Milhouse on the north side of the road about a quarter of a mile east of “Old Hickory” upon the present school site. This school received the name of Washington and was much improved over the two former buildings, both and structure and equipment. During the first winter, between 75 and 80 pupils enrolled.  The following were some of the teachers who taught in this building:  William Hyet, Walter Gray, Hyram Cooper, Mr. Gallup, John Litherland and Hiram Hardacre. 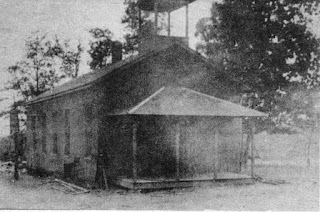 The fourth school House was directed upon the same site in 1884 by Martin Eshelman. This building was used as a school house for 29 years and was replaced by the surviving structure in 1914. The present building was planned by the Principal, L. Earl Milhouse, designed by Mr. J.M. Gaddis, architect at Vincennes, Indiana, and constructed by Mr. H. A. McClery, contractor and builder at Bridgeport. In 1914 it was one of the most up-to-date rural school buildings in the state of Illinois. Now the little verse at the beginning of this article, once again describes the building. 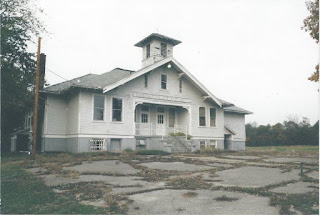 (This history is provided from The First Annual Booklet of Washington Standard Graded Rural School published 1914-1915.)