The Lawrence Police force was rapidly putting on metropolitan airs.  A call bell was installed on the square consisting of a gong connected with the telephone exchange.  If you wanted an officer in a hurry you called Central telephone office; they pushed a button that rang the gong and the officer would call from the nearest telephone to find out where he was wanted. Another innovation was a new patrol car.  A Ford had been purchased and painted brilliant red so that all vehicles and pedestrians might recognize it and yield right of way.  (Unfortunately, we have no photo of this car.)

Lawrenceville City Council passed an ordinance that effective September 9, 1920, that no person shall be permitted to drive any automobile, truck, motorcycle or other motor vehicle on the streets of the city without having a muffler. Is that still in effect?

Also, the police were instructed to stop the parking of cars on 12th street in front of the Phoenix Theater.

And because of the number of accidents and confusion regarding who had the right- a- way at corners, a diagram was published to aid in understanding this tricky concept…. 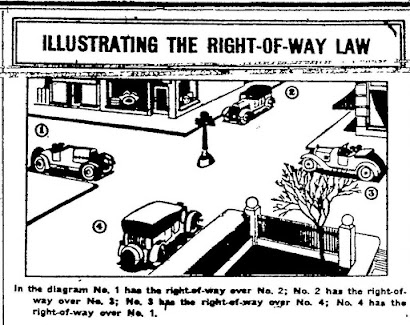