The researchers continue to try to identify old photographs. One of the ways they hope to help others identify their photos is to ascertain when the local photographers were in business. Thus if you have a photo that includes the name of the photographic studio, knowing when that photographer practiced his/her trade might help. 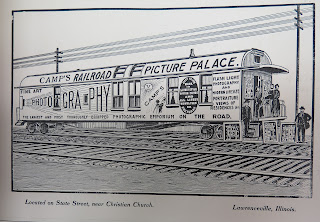 We know the Camp Photography Studio was  located at 1320 West State St. and had several different managers and photographers as early as 1912.  (Some of you might remember the Spot Cafe? Before it was a restaurant, it was Camp's Picture Palace.)

P. F. Graber who has been in charge of the Camp Photo car for 1918- 1919, retired to assume a business position in St. Louis. Flora E. Schultz, the daughter of Mrs. J. W. Doe of Lawrenceville, had been employed there when she married P. F. Graber in October, 1919, and they left for St Louis. 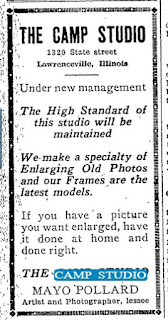 Mr. Mayo Pollard of Decatur then acquired the studio but the name continued as Camp’s Studio. That fall, Harmon White, of Decatur, was also employed at the Camp Studio producing a special line of commercial photography and portraiture.

In June, 1920, D. l. Foster of Bridgeport leased the Camp Photo car.  They advertised "portraits, views, enlarging, copying, framing, amateur finishing, Kodaks and supplies provided" at the studio.  No Sunday work would be done except by appointment.

We are still researching this topic and will post any additional information as we locate it.