Conclusion of the article, Couple of Lessons from Bett,  by John Hamilton 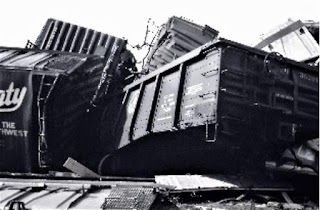 “The derailment occurred about 8:30 a.m. a few feet west of the Twelfth Street crossing when an aluminum ingot, said to weigh approximately one ton, broke loose from its binding in a flat car and bounced beneath the wheels on another car.” The engine and several other cars ahead of the derailment remained upright and on the track. The wreck twisted the rail and caused the following cars and the caboose to end up on the ground, but upright with the contents intact.

Cars in the piled-up wreck weren't as lucky. Contents of the wrecked cars included fresh vegetables and melons, lumber, cases of motor oil, tallow, flour, sacks of potatoes, and other perishable items, most of which Ms. Moore reported as being salvaged. An interesting bit of cargo were electric welders destined for the Turkish Army in Turkey. Two tank cars were filled with wine, which quickly drained from their cars on to the street and ground. A Swift Premium refrigerated car filled with meats remained upright, but ended up on a siding near the Texaco fence—wheel-less. 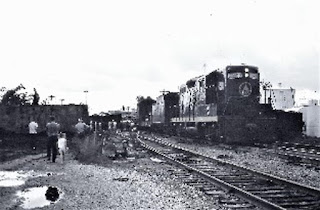 The article praises local firefighters for being on site and acting quickly when the need arose. They were alerted to one boxcar that ended up just 14 inches from an Emulsions, Inc., tank just north of the tracks. Ms. Moore also applauds the local police agencies for keeping the crowds cleared away so the wreckage crews could do their work. B&O crews and equipment arrived on the scene early and had the main line cleared for traffic within about 24 hours, although the complete cleanup took a few days longer.

In her many years writing about Lawrence County, Bett Moore was always aware of the human element of the news. Such was the case when she added to her story an interview with Russel Hamm, station agent at the B&O station at the time of the wreck. “I heard a rumble,” he said, “looked up the track and saw a cloud of dust and knew what was going on. You never saw anyone run so fast in your life! I was out of the building and going north on the New York Central track, because I could just see those last cars winding up through the depot—and I wasn't staying in it!”

Besides being the editor of the Lawrence County News, Bett Moore also wrote a column called “Jest About Things,” which contained her observations about things in general. In the same issue about the wreck, Bett also wrote about the seriousness of the emergency people assisting in trying to keep the general public out of harm’s way. She tied to explain that those people have a job to do and most often that involved trying to keep people from getting hurt. She also reminded people that newspaper reporters have a job to do and often have access to places an ordinary citizen would not. In this case she also touched upon pilfering of those goods that had been spilled in the wreck—and the fact that while she witnessed some, it wasn't much and her tone indicated she wasn't pleased about that part.

Another person Bett wrote about was Mary Reeder, who owned Mary's Cafe located near the Texaco Main Gate. Mary said she couldn't keep cold “pop” to save her neck because of the many thirsty spectators. She also said she saw a 100-pound bag of potatoes lying across the street from her place and “could have had them before anyone ever got down to the wreck. But I knew they weren't mine and I just couldn't take them—but someone got them because they weren't all there later on when the train men arrived.”

Bett applauded her actions and added that the pilfered potatoes probably wouldn't have tasted too good anyway.

John Hamilton concluded his article, the first part of which was published yesterday, with the lessons he learned: Don't assume you know everything about something (makes you look stupid when you're wrong) and Honesty is the best policy (an oldie but goody). 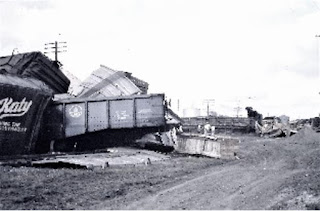 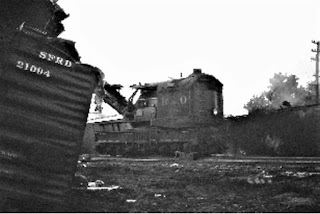