Charles Gerhart, Lawrenceville farmer living on the Vincennes-Russellville road, has solved the mystery of his disappearing chickens.

The other day Gerhart saw a strange varmint approach his chicken house and run away with a nice fat hen.  He was on the lookout when the varmint paid a return visit, and let it have a full charge from a double barrel shotgun.

Gerhart showed the carcass to a friend who formerly spent some time on the western plains.  The friend told him the varmint was a coyote, or prairie wolf.

A day or two later Gerhart saw a young coyote pup, and still later brought down a male coyote. He found the den on the bank of a creek and concluded from all the scattered chicken feathers that the coyotes had been the robbers that had badly depleted his flock of chickens. 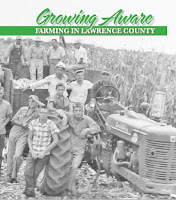 Read about the two-legged kind of chicken thieves in the Historical Society's newest publication, Growing Aware- Farming in Lawrence County, will be available for sale November 17, 2019 just in time for Christmas.