Have a good Saturday.

Deaths of Children in July 1920

Raymond McNeil Ridgley was born in Lawrence County Illinois June 1, 1904, and died June 28, 1920, age 16 years and 20 days. He was an invalid all his life, yet succeeded in reaching the sixth grade in his school career. Services were conducted at White House Church after which the body was laid to rest in Pleasant Hill cemetery nearby. (The researchers found no tombstone there for Raymond.)

Harriet Beecher Lockhart, little daughter of Beecher and Cora Lockhart of Washington, Indiana, died at the home of her grandfather, A. G. Seitzinger of Allison township, July 15, 1920, and was buried at May Chapel.  The mother and daughter came to the home of the former’s father to assist with the housework during threshing season.  The little girl contracted diphtheria and passed away at the age of 2 years, 3 months, and 13 days.

William Eugene Ferrenberg, the two-year old son of Mr. and Mrs. W. G. Ferrenbert, died in Winchester, Kentucky, July 23, 1920, and the body was brought to May Chapel for burial.  The child had been ill with brain trouble for some weeks.  The mother, who was formerly Miss Myrtle Newell, was ill and unable to accompany the funeral party. The body was accompanied to its last resting place by the father and two little daughters as well as Miss Rachel Newell, an aunt of the deceased, who made her home with the bereaved family.  The child was an only son.  (The researchers found no tombstone for little William.)

Dr. Tom Kirkwood, son of Mr. and Mrs. R.M. Kirkwood, of this city and Miss Margaret Godfrey of Wilmington, Delaware, were married at the home of the bride last Saturday.

The wedding marks the culmination of a romance which begun in the Delaware hospital more than a year ago. Dr. Kirkwood was an intern in the hospital when Miss Godfrey entered as a nurse and the acquaintance this formed, ripened into more than just friendship. After his term in the hospital expired, Dr. Kirkwood returned to Lawrenceville and entered the practice of medicine.

It is expected Dr. Kirkwood and wife will arrive in this city within a few days, and the News extends hearty congratulations along with hundreds of other friends of the groom.

One of the First Horseless Carriages 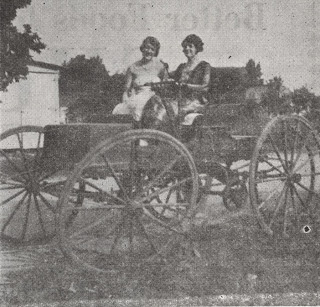 We have posted this photo before of  Dr. R.J. McMurray's two granddaughters driving his  horseless carriage in St. Francisville.

The researchers have since learned that it was a two cylinder horseless buggy bought about 1903 for $600 called the Holsman.  It had been built to compete with the Ford.

In 1920, A. L. Maxwell had it on exhibit in his showroom in Lawrenceville as one of the first models of automobiles used in Lawrence County.

Crime  The Monthly Round-Up for July 1920

Fined for speeding in July, 1920, were Harold Wilson, Marcum Wells and Earl Mills.  Wilson drove a delivery truck for The Table Grocery and Wells drove for O. B. Carrithers. Also charged were Mrs. Ella Robins for speeding on East State Street, Edmond Smith for speeding on South 12th, Ralph Balding on 11th, and Otis Gray on East State Street.  The editor noted that “it was absolutely safe to assert that at least one hundred drivers violated the speed laws on at the same time but the officers did not happen to see them and they escaped.”  The state law in effect at that time was that “cars must be operated at a rate of speed that was reasonable and proper having regard to the traffic so as not to endanger the life and property of any person”.  The statue was for drivers not to exceed 10 miles an hour in the business section, 15 miles in a residential area, 20 miles outside these two areas, and 30 miles per hour on public highways.  In going around curves or corners more than 6 miles an hour was considered dangerous.  At this time Lawrenceville had only two policemen to enforce its speeding violations.  (I'm not sure my car will even drive 6 miles an hours arounda curve...)

Harry Joiner (colored) was arrested Saturday on a charge of exceeding the speed limit. He pled not guilty, the case was set, but before the trial began, Joiner pled guilty and paid $1 and costs. (This was the way he was identified in the newspaper in 1920.)

Estes and Nora Robinson were sued by Ross French who lived on the Robinson farm in Christy township.  There had been some disagreement over the lease and Mrs. Robinson had allegedly threatened bodily injury to French.  The court found against Robinsons.

A burglar entered the John Kittles home in the Titus addition south of the B& O and took $41 and a check for $36, Sunday night, from Kittles’ trousers hanging at the head of his bed while he slept.  (Wow, that was some gutsy burglar. Did anyone check the wife’s purse?)

Albert Gootz and Lyman Quick engaged in an altercation and the former swore out a warrant charging Quick with assault and battery.  Quick pled guilty and was fined $3 and costs, a total of $10.60.

Wm Lynch was arrested July 17 on a complaint of Emery Guthrie who charged that Lynch had permitted his chickens to run at large.  The defendant demanded a jury trial.  Charles Montgomery,


O. Burrell, A. C. Stiles, B. A. Montgomery, Hort Gravitt and H. J. Seed heard the evidence, decided the defendant was guilty and fined him $1 and costs, a total of $11.65.  (I would have loved to have heard THAT evidence...They weren't my chickens but even if they were my chickens, I didn't let them loose.)
Posted by Donna Burton at 4:30 PM

Two food inspectors fined several county merchants for not complying with sections of the Illinois Egg law, July 1920, which requires that eggs be candled and that merchants selling eggs at wholesale first take out a license.  Seven merchants were found guilty of violating the law and were fined $15.00 and costs each.  Those fined were: S. I. Carlyle and A. K.  Steffi of Birds; V. G. Boyd of Bridgeport; Guy Mills, Ed Adams, M. A.  Rooney and Gray, Tennison & Company of Lawrenceville.

During an electrical storm this month Chester, the son of Wm. Benson, was shocked by lightning. He was helping his uncle, L. L. Benson, chop-out corn in lower Russel township. A hoe he was carrying was knocked from his hands.

R. S. Jones, Paul Staninger, A. L. Maxwell, James Alexander, F. W. Keller, C. R. Breen, J. N. Stansfield and H. C. Wheeler met with the organizers of “the biggest train of motor trucks ever assembled outside New York and Chicago auto shows” to educate the farmers about the practicality of using trucks to economically operate their farms. It was publicized that a pneumatic tired truck could accomplish what it took four teams of horses to do. Motorizing the farm was the goal of the exhibition.  (A later paper said “the biggest train of motor trucks ever assembled” amounted to about a dozen accompanied by several speakers and a string band.)

Because of strikes, transportation difficulties and the shortage of wire, it was feared there would be a shortage of baling wire for this season’s hay crop.

The agriculture columns in the newspaper this month were filled with articles about the danger of Chinch bugs, and the damage they were doing to local crops.  After the wheat crop was harvested the bugs came out and started on the corn crops.  The Farm Bureau said a creosote barrier could be used while the bugs were little and before they got their wings.  (Don’t ask me about this subject. I couldn’t identify a chinch bug if one bit me on the toe, but apparently George Treadway, south of Billett, used this technique very effectively. Roger Kirkwood just southwest of Lawrenceville and George Foss of Lukin also controlled the bugs successfully by the use of the creosote barrier. They then trapped them in post holes and killed the little critters.) P. S. don't send me any bug pictures.

One of the largest blackberry crops in the memory of the oldest inhabitants was gathered in Lawrence county the season of 1920.   The price varied from 50 -75 cents a gallon. The newspaper editor noted that “years ago the blackberry was called the poor man’s fruit, but with the present price of sugar added to the market price of berries, they are now in a class with luxuries.”

The Pioneer Asphalt Company was organized in 1915 by H. B. Pullar who managed the company in 1920.  It had up until that time been owned and controlled by Sir William Mackenzie of Toronto, Canada.  In 1920, it was purchased by well- known businessmen in Lawrenceville, Bridgeport, Vincennes and Robinson.

The company produced a complete line of asphalt specialties sold throughout the U.S., Canada and foreign countries. Their principal product being mineral rubber which was used by all the large rubber companies in compounding with crude rubber.  They also supplied nearly all the large battery manufacturers with seal compound for sealing storage batteries used in automobiles. Their other products were used from many purposes, among them being a full line of paints and liquid asphalts including high grade roofing and barn paints.

In 1920, the company rebuilt their plant in Lawrenceville, which was said to be practically fireproof.  They employed 70 men during 1920.